Change yourself, and change the world

Change yourself, then and change the world

I came across compassionate assertiveness by accident back in 2011. I had divorced from a narcissist five years earlier, and my radar for them was now so high that I spotted them everywhere. In a word, in a look, and in the reaction from their recipient most of all. The irony for most narcissist thrivers is that they gain this superpower, AFTER they need it.

My body was used to living in sympathetic instead of para-sympathetic mode and had ‘protected’ me accordingly by adding on weight both physically and mentally. Your body does this to keep you safe from harm, afflicting you with a myriad of ailments and aches and pains as a daily reminder.

My go to was ‘angry’ with a side order of frustration. I had zero tolerance left for the dominants, the sarcastic in denial, control freaks, the “you should haves.”

My job ended abruptly in a scary showdown of epic proportions involving throwing things across the room, clearing my desk with one dramatic sweep, coffee (and mug) up a wall, breaking the photocopier. It ended in me wondering where the receptionist had gone (she was under the counter hiding), handing my company car keys back and then walking out with my remaining shred of dignity.

Elemental Potential was born the next day. Back in 2011 you could find very little mention of something called Compassionate Assertiveness. Nowadays it’s more prevalent. Compassion is being taught in schools and compassionate leadership styles abound.

Working through the process of compassionate assertiveness changed me almost overnight. Once I realised it worked, there was no going back to old ways. Actually, that’s not true. Occasionally I slipped, but had an extra level of awareness that I had, and did something about it.

The model I created back at the end of 2011 has now been taught to over 25,000 people globally, and over 1500 businesses. It’s not that I’m not proud of what I’ve achieved in the past decade. I am.

Here’s the issue I have. That is like putting a thimble full of liquid healing balm in the ocean. It might do something for the creatures and plant life that are immediately near to where I drop the liquid in, but in the great scheme of things – the whole ocean, not so much.

I have taken many businesses through a whole process of becoming compassionately assertive over 3-4 years and those businesses changed exponentially. They changed in the way they work, the people they attract, how people feel working for them,, (and buying from them), they’ve made more money by default…. The list is endless.

The people who did it for themselves changed in other ways. They saved or left relationships, became the parents they always imagined they’d be, an amazing boss to work for, an incredible role model for others on communication. A better partner.

So, I’m grateful. Truly. For the people who came to those early classes when it was still a weird and slightly woo woo topic. For those who really tried it, not just turned up and listened. It was hearing about their results that helped me to hone the model.

I am now 12 years on from those times, and it’s not enough. I’ve rejected so many ways during those years after spending much time, and money in consideration of how I get this concept out to the world. I have no ambition to ‘force’ people to become compassionately assertive by making it a thing in businesses and schools, by franchising the model and having an army of mini me’s around the world teaching it.

It was always meant to be more organic than that. One person creates a ripple. Those people create a ripple. My intention was never to be the gatekeeper for this, but instead to make myself obsolete!

So yes, the title is intentional. Change yourself AND change the world simultaneously.  It’s not you, and then the world. If you change. If you become compassionately assertive you will automatically change others. You raise your own consciousness level, you raise awareness.

Here’s where it gets a bit woo woo again for some of you reading this. Once you activate this change, then it goes from a thimble of healing balm in the ocean to being distributed evenly in the vastness. You are now not only raising your own consciousness level – you are helping raise the vibrational energy of the whole planet. Can you imagine what happens then? I can, and I hope I get to see it in my lifetime.

So where do you begin?

Be really honest about what is working for you in your life and what isn’t. What have you invited in that is now hard to change? What do you wish could happen?

How do you learn it?

I have a really simple e-book that explains it and gives you the tools to try it out in every human interaction you encounter. You might see which communication style you are currently running on too.

Click here to buy: The Ultimate Guide to Compassionate Assertiveness

What will running on compassionate assertiveness do for you?

It will help you to be a more authentic you. Sometimes we shy away from telling people things, how we feel, how they make us feel, because we think it’s easier or to avoid what we perceive as conflict. Often that just makes things worse or prolongs what you are dealing with.

What will it do for others in your life?

They will understand you more. Your likes and dislike. Preferences. It might mean that you shed people from your life too, who drain your energy, manipulate you or take instead of giving back.

What will it do for humanity?

Raise the vibrational energy of the planet. Think of all of the horrendous things that have been done to people by certain people in the past. Could that have been prevented if just one person had spoken up? What if many people had spoken up? I call that the power of the many over the few.

Now we’re talking. What if there were more compassionately assertive people than narcissists, sociopaths and psychopaths. What if there were less passive people? If the ratio was more aligned. The balance needs to tip. Will you help? Are you helping? Or are you hindering?

I have no desire to run events on compassionate assertiveness anymore that attract a few people in a certain area, that is me still staying in ‘thimble mode.’ If, however you have an idea to motivate a multitude of people you have in your sphere then please reach out to me and let’s talk about how we do that together.

If you read the book and have questions or examples on how it’s worked for you, please get in touch too. 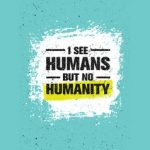 The link between your favourite meal and communication?

Change yourself, and change the world

The Beauty of Working Virtually